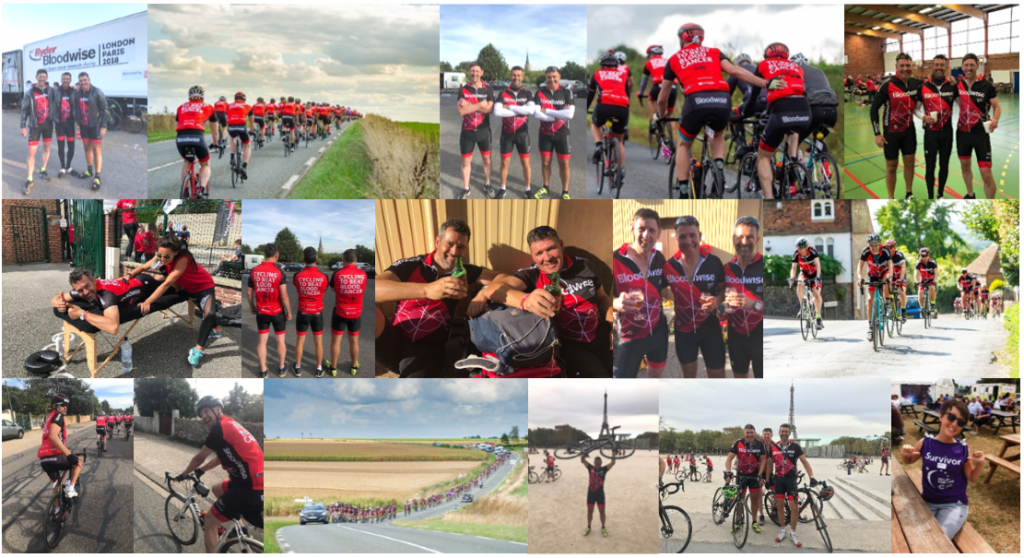 Day 1 – After at 6am start at Eltham Palace, the boys cycled just over 70 miles today to Dover where they then got the ferry to Calais.

Day 2 – Heading through Pas de Calais and the Somme, 87 miles completed today. Someone’s got sticky tape on their helmet and someone’s getting a rub down. A lovely evening and a few beers in Abbeville.

Day 4 – With a full rolling road closure up to the Arc de Triomphe and then onto the Eiffel Tower the boys arrived safely in Paris, emotionally drained, achy legs and bums!

You tube link attached, you will spot Ken, Lee and Ric singing to George Ezra’s ‘Paradise’ at 42 seconds – enjoy! https://www.youtube.com/watch?v=v74YLvHfzdE 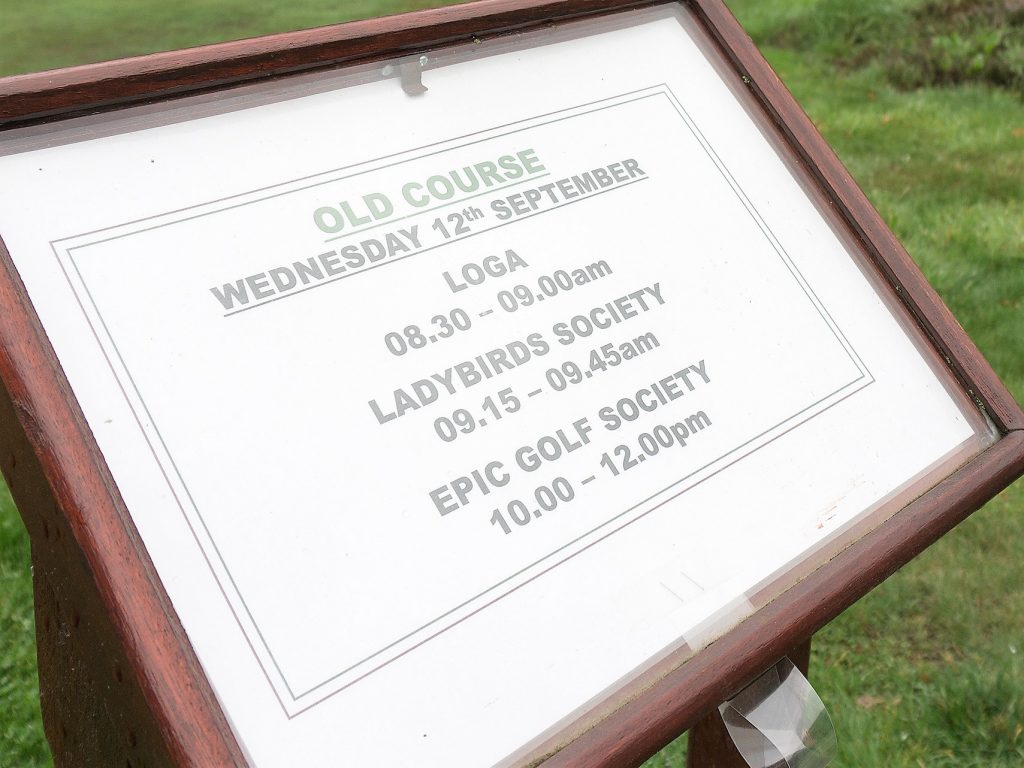 The day threatened rain and despite a dry start the rain duly came. A shame as it was the only wet day forecast for days before and after the event.

But did this dampen the enthusiasm of the 47 participants – Not at all!!

The course was magnificent and a real challenge to all with anything wayward being punished severely by the heather which either swallowed the golf ball or made it near impossible to play, certainly a real penalty!!

The score reflected the difficulty. It will be interesting to watch the Masters contend with it in early October (11 – 14 to be exact)

A fine meal was enjoyed by all

Team Winner were Captain Darrell Lewis and Jeff Lewis with a massive 47 better ball score from Neil Meixner and Digby Hebbard who came second on the back of an eagle on the par 5, 8th by Digby securing 5 stableford points!!

The guest runner-up was Stewart Le Boutillier on 36 points with inevitably Jeff Lewis on 38points taking the top spot! Well done Jeff who has now joined the society. 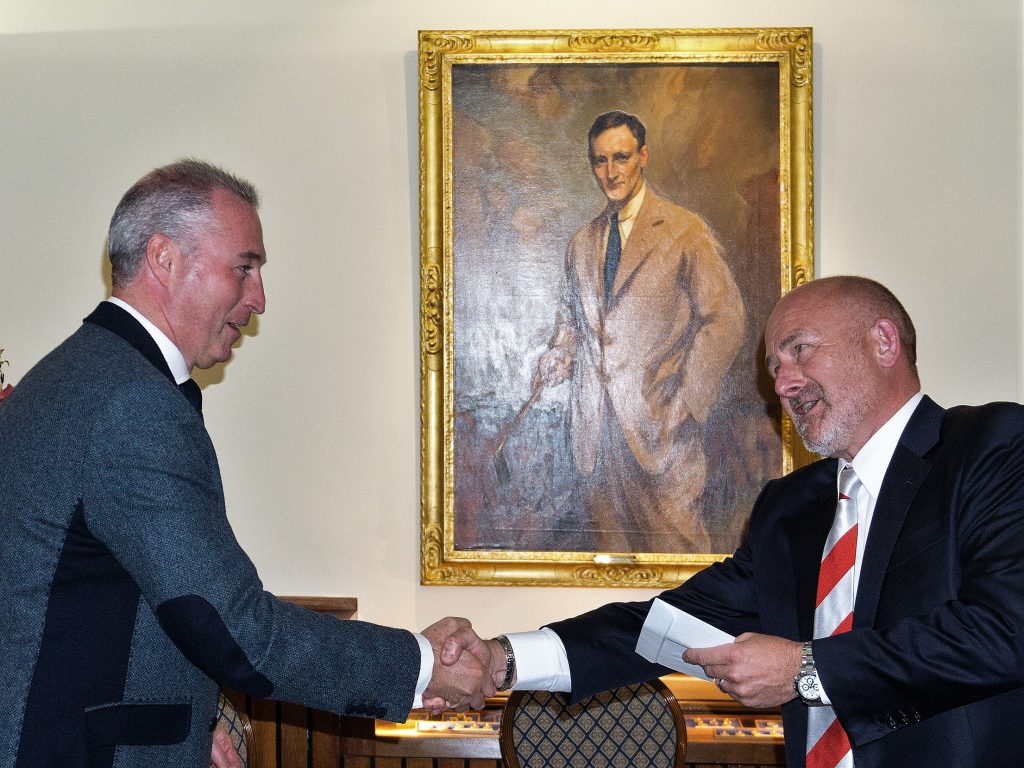 Congratulations to Steve on a great performance.

The hand-picked team to take on the old enemy were primed and ready to go!!

However our opponents once again proved to be much too good and triumphed by an impressive margin!!

What a day we had at Ashridge on Wednesday 4th July!!

15 EPIC members and 12 guests took to the course in high anticipation. The course was dry as was the weather. The greens and tees had been well watered but the pace of the greens was difficult to read. Uphill slow and downhill lightening quick by all accounts.

As usual Ashridge did us proud with a beautifully set up course, a ploughman’s lunch to set us up for the round and a magnificent three course dinner to end a beautiful day.

The ball travelled a long way on the parched fairways which might in some way help to explain the generally high scoring.

Congratulations to Martyn Rowlands on achieving all golfers target in getting his first hole in one on his second hole (11th at Ashridge).

The scorer had some difficulty in assessing the winners in the various categories. Thanks to those who lent a hand in checking cards!!

So to the results – 5 of 7 teams returned the yellow ball but the team of Robert Seeley, Paul Lewis, Charles Gjertsen and John Gale won with 42 points some 9 points ahead of the rest!!!

When it came to the team prize after adjudication Martyn Rowlands and Robert Currie posted a magnificent 50 points. 4 teams on 46+ points must have thought they’d taken the prize. Congratulation to Martyn and his guest Robert on their stellar round!!

Our Guest Winner was Giles Korner with 42 points ahead of second place Paul Lewis on 38. Great scoring once again.

Now to the EPIC Finlinson Cup where two fantastic scores were posted. In runner up spot (cut 1) was Chris Anderson on 41 points but our worthy winner (assisted by his hole in one for 5 stableford points) was Martyn Rowlands on 43 points. His achievement is all the more remarkable as he said he hasn’t played golf since the Charity day exactly one year ago.

Remember to put Walton Heath in the diary – 12th September!!!! 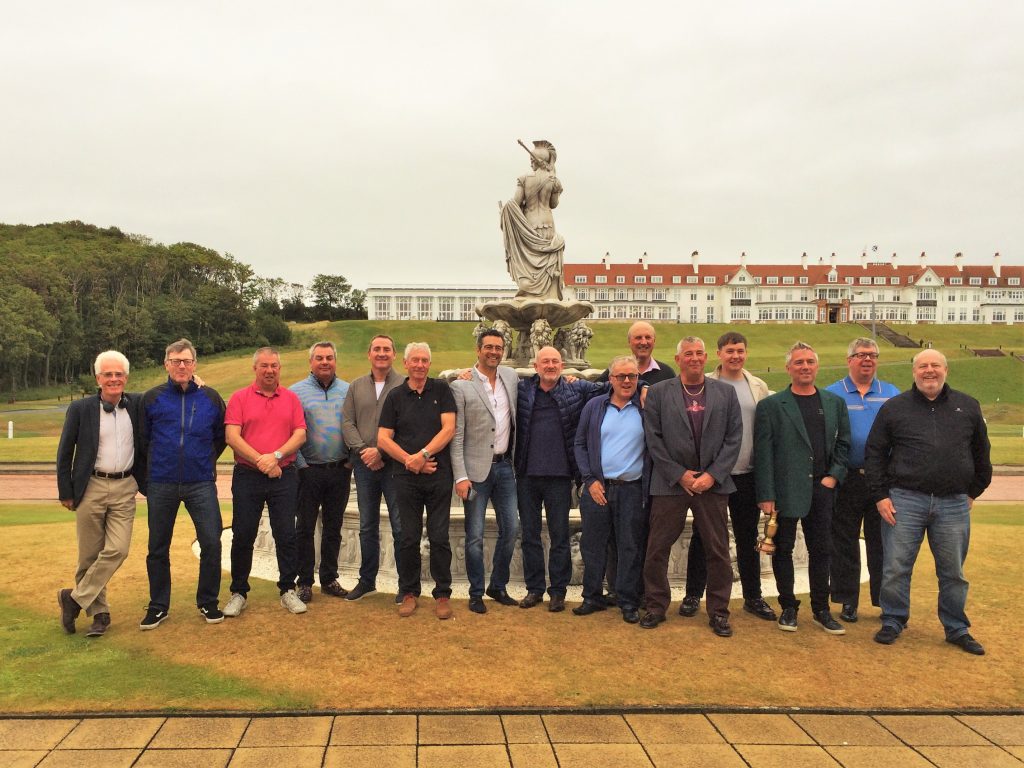 The Tour Party (minus David Featherstone, who left early for the airport but left the airport last due to delays!!!!!)

A great time was had by all who attended the 2018 Tour to the magnificent Trump Turnberry. The accommodation, service and food were all exceptional.

We played the Ailsa course twice and the King Robert the Bruce once and whilst the weather left a little to be desired at times the views and courses were magnificent. 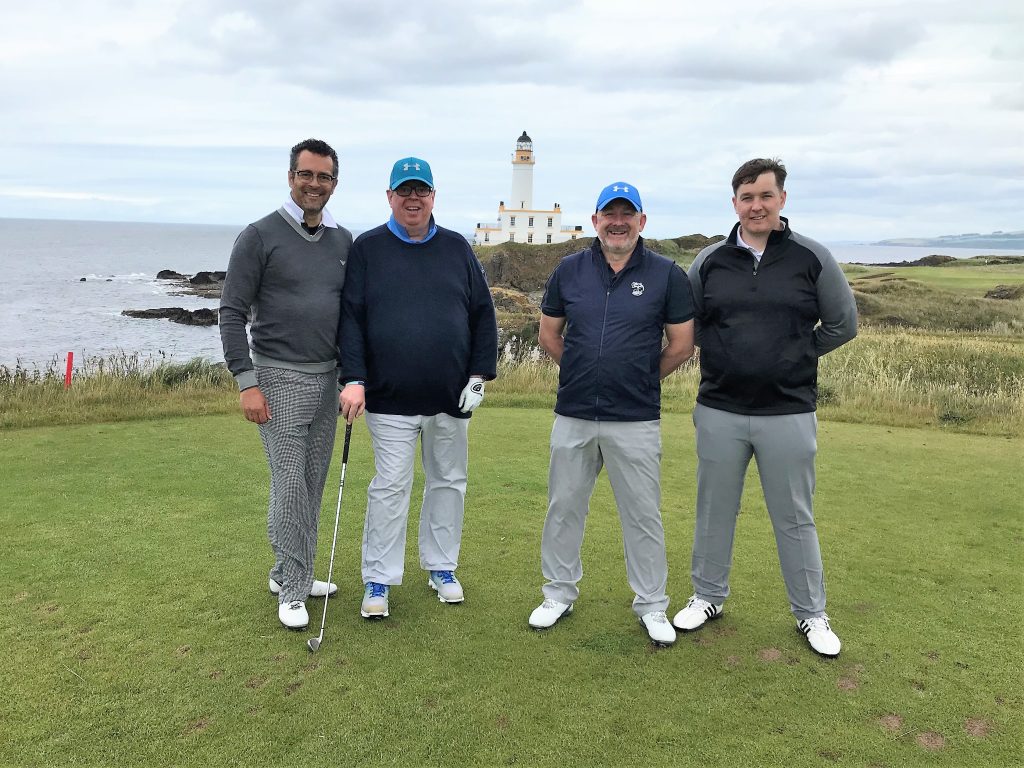 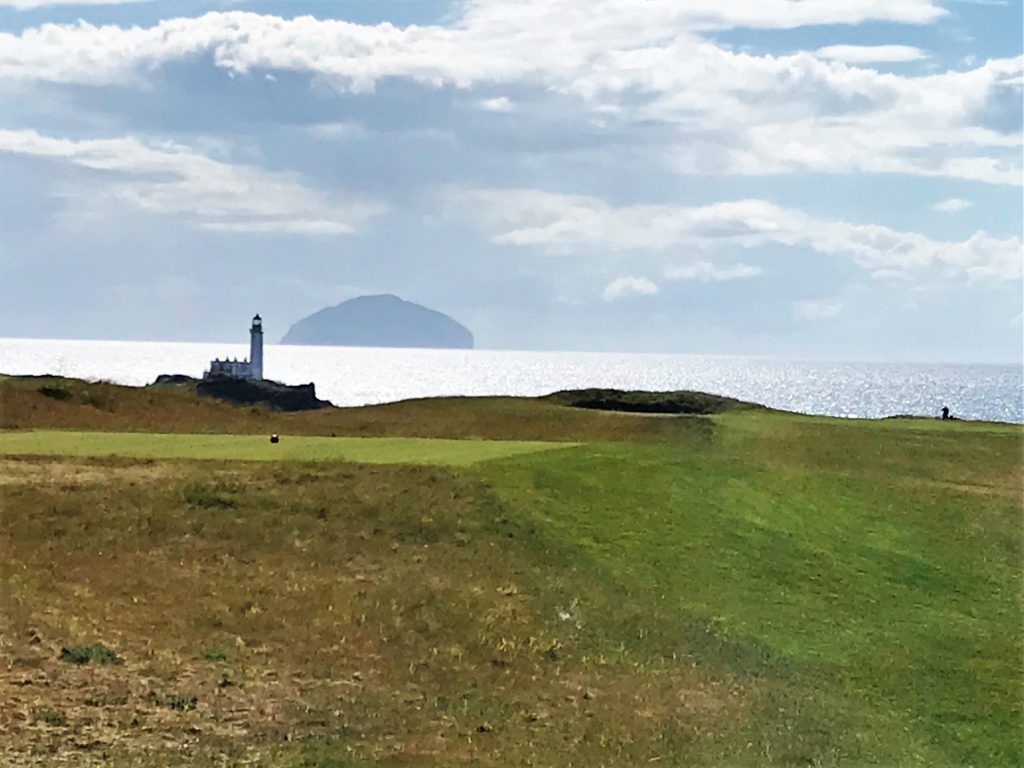 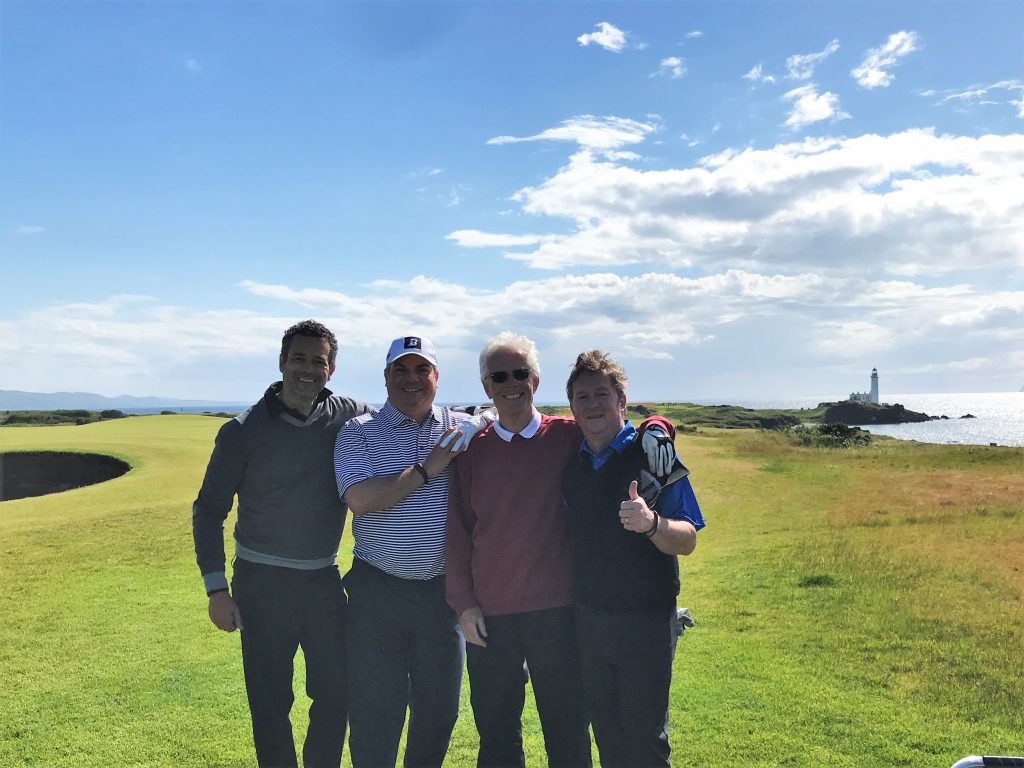 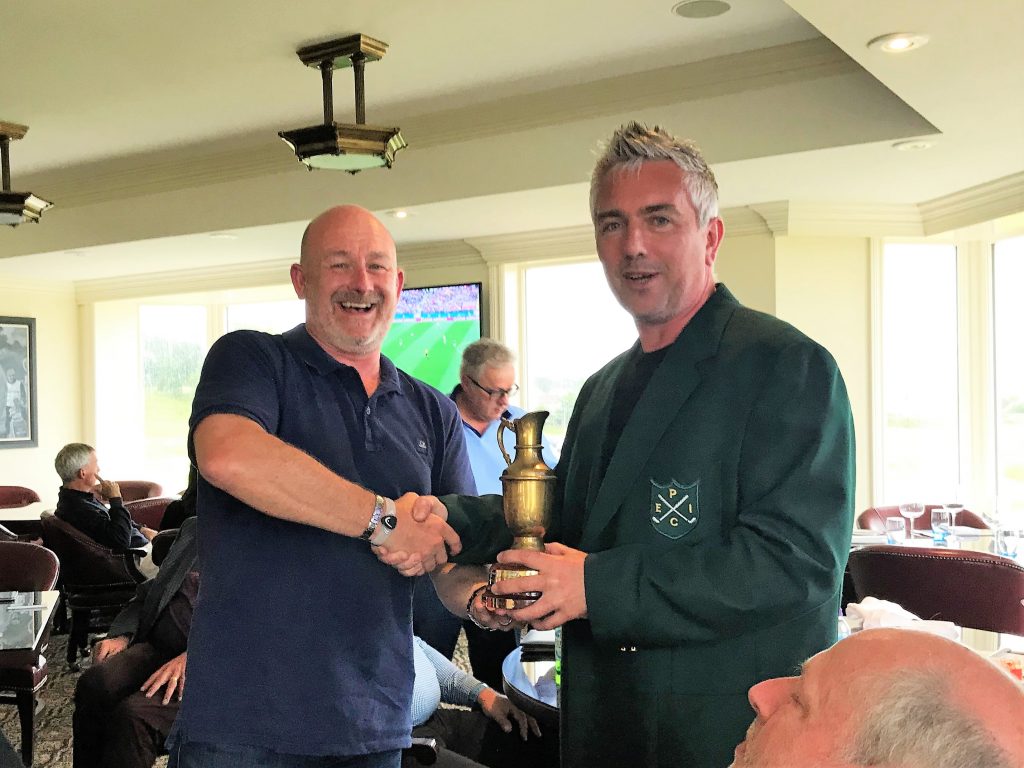 The Green Jacket was a closely fought affair this year as always with Jason Wood dominating the last day in wet and blustery conditions to secure top prize – The Claret Jug and the coveted Green Jacket.

In 2017 EPIC raised £8099.30 for Ehlers-Danlos Support UK and here is their lovely letter Click Here for Letter thanking you all  for your generosity.

In turn we all at EPIC would also like to thank all our guests at the Charity day for their generous support.

We had such a lovely day at Moor Park Golf Club.

The weather was fine (well a couple of drops of rain as we set off). The course was in magnificent fettle (even if the 4th’s Temporary Green was the worst I’ve ever seen – perhaps that’s because they don’t usually do that sort of thing at MP).

Anyway the improvements they’ve made to the course must have toughened it up  as only one player got round in their handicap, more of that later.

The setting for dinner in the main house was fantastic and the food was excellent and with noisy banter as a measure it seemed all enjoyed the day immensely.

The Spring Cup was a very close affair with 6 players within 2 shots of the winner!! However on Steve Davies lost out on count-back and  Aiden Mahoney (Cut 1) who also narrowly missed out to John Biscoe (Cut 2).

Congratulations to John who of course now leads the “Player of the Year” competition!!!!

Get the date in your diary!!!

A great time was had by all the 24 attendees at the Annual General Meeting of the EPIC Golfing Society on 21st Feb 2018 at Brasserie Blanc in Charlotte Street, Fitzrovia, London.

The AGM itself was conducted in a friendly atmosphere with the usual banter as background noise followed by the award of prizes and replica golfing trophies for the 2017 year. For the Minutes click here => Minutes of AGM 2018.

The meal after was excellent and all let their hair down in traditional style.

If you were there you might remember, if you weren’t you missed a great evening!!

So it was second time lucky!!

The morning dawned bright and sunny – not a hint of the snow that had so cruelly stopped our annual event between Xmas and New Year!!!

Thanks to the 11 members and 4 guests who obviously hadn’t got anything better to do for supporting this rearranged event.

The course played exceptionally well even if the greens were by common consent a little slow. Talking of slow the last group had an early shower as the weather which was generally magnificent closed in for a while.

With 8 prizes and 15 players the chances of a prize was high – despite this yours truly failed to make an impression.

Nearest the Pins were in 2 on the 9th Guest Mick Hutchins and on the 14th Barry Jenkins. The winning “Waltz” team , from second placed Barry Jenkins, Mike Hutchins, Steve Davies and David Torrence on 85 points, were Jason Wood and his guests Brian O’Riordan, Michael Cronin and Julian Bunting on a magnificent 87. They scored a magnificent 10 points on the 15th Hole – Stroke Index 1 . Not bad eh!!!!

The Recessional Bowl for EPIC Members was hotly contested with Jason Wood only too grateful to have missed that easy putt on 32 points losing out to new boys Aidan Mahoney (Cut 1) who in turn lost out on countback to Steve Davies (Cut 2) on 33 points.

Congratulations to all and I look forward to seeing you all at the AGM!!