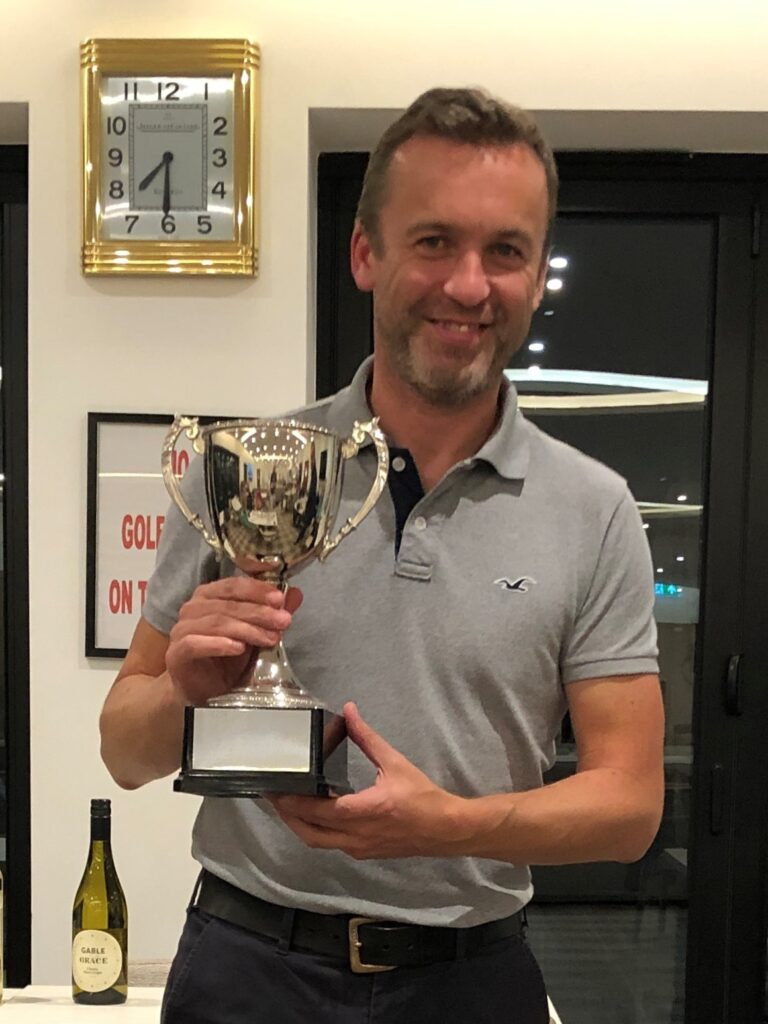 Congratulations to new member Jarlath Rooney who walked off with the Presidents Cup!!

12 members and 7 guests played Abridge Golf Club on a chilly but dry autumnal day. The course played well despite being a bit wet and suffering from some extensive earthworks which I’m sure will improve the playing conditions even further if the future.

All enjoyed a Bacon Roll on arrival, 18 holes and a very filling 3-course dinner.

Guest Paul Lewis (also the photographer for most shots) 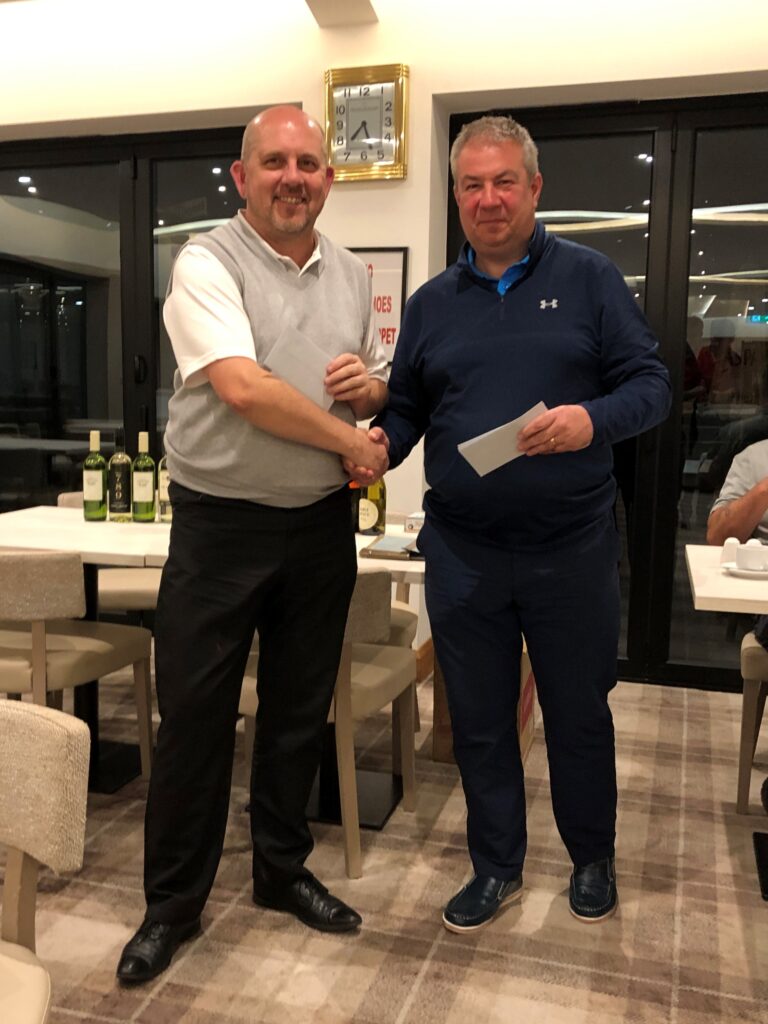 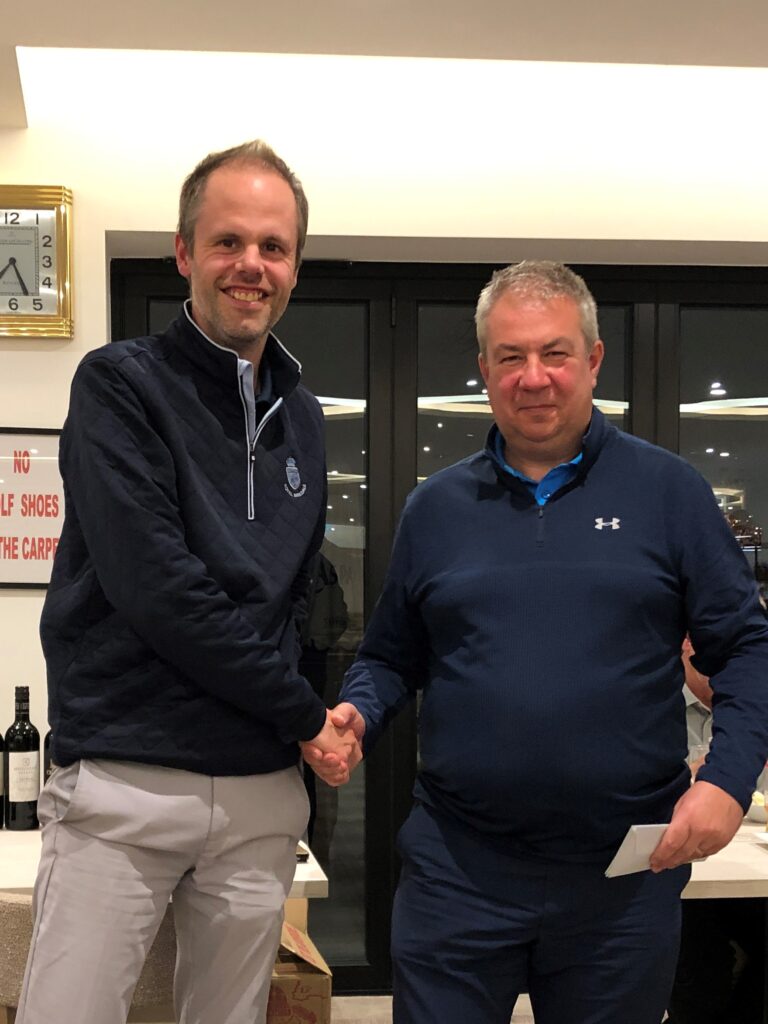 The team prize was very closely contested with 2 teams on 39. 2 on 40 and 2 on 41 points with Michael Salmon and David Wannerton narrowly taking the money!! 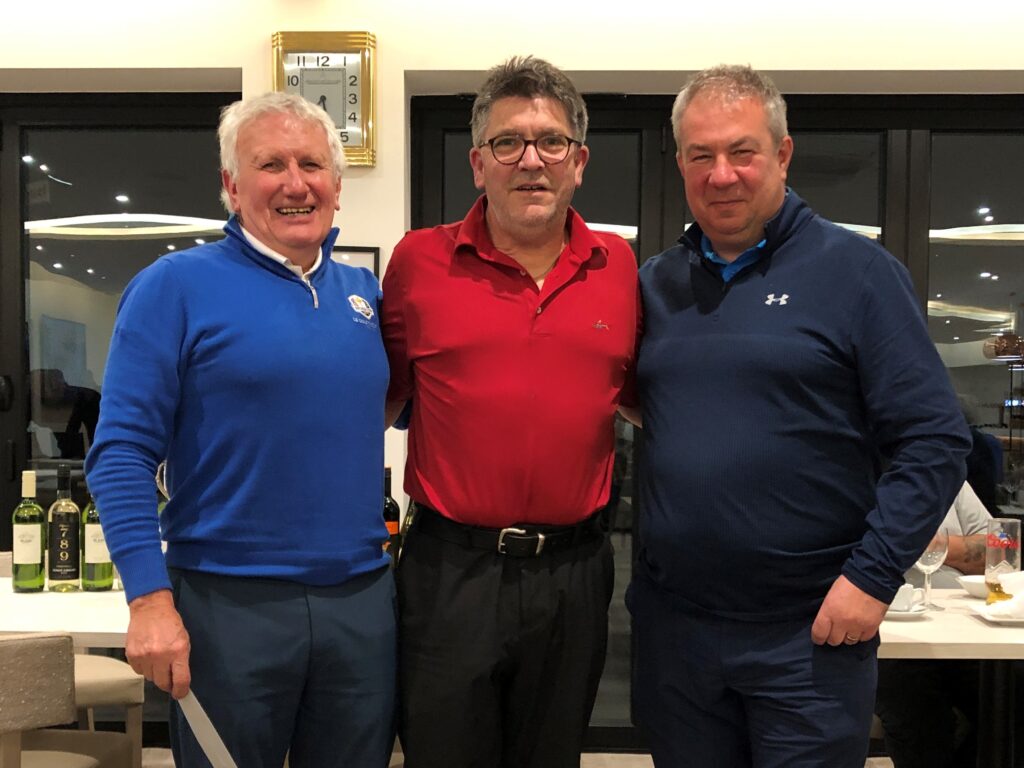 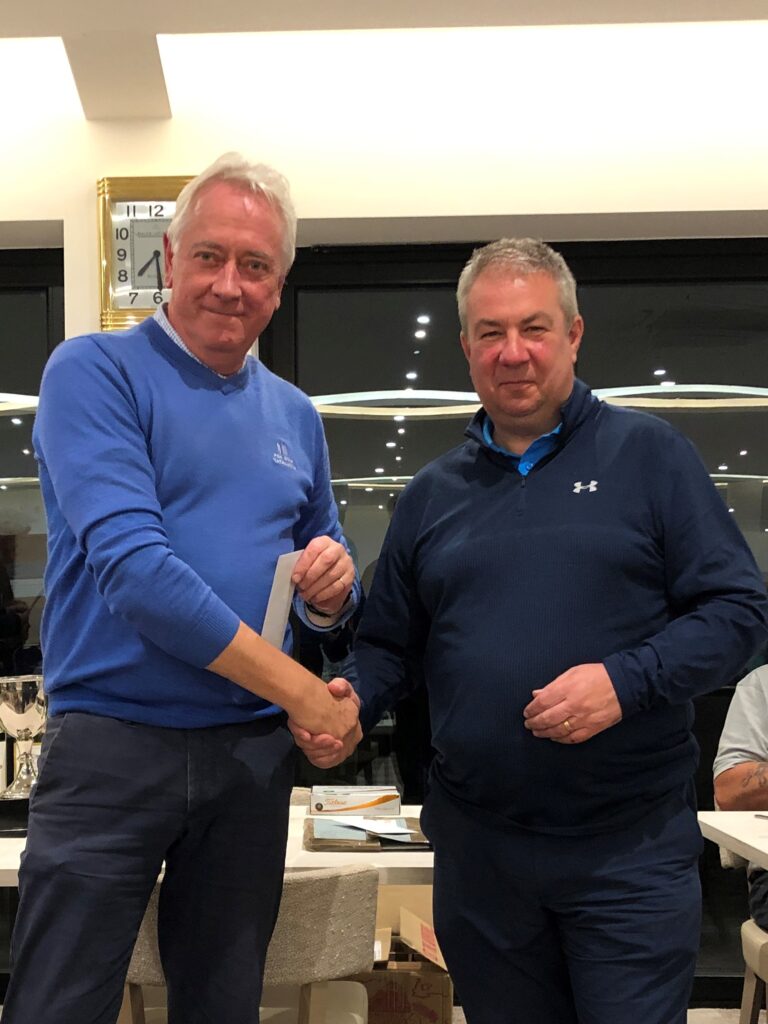 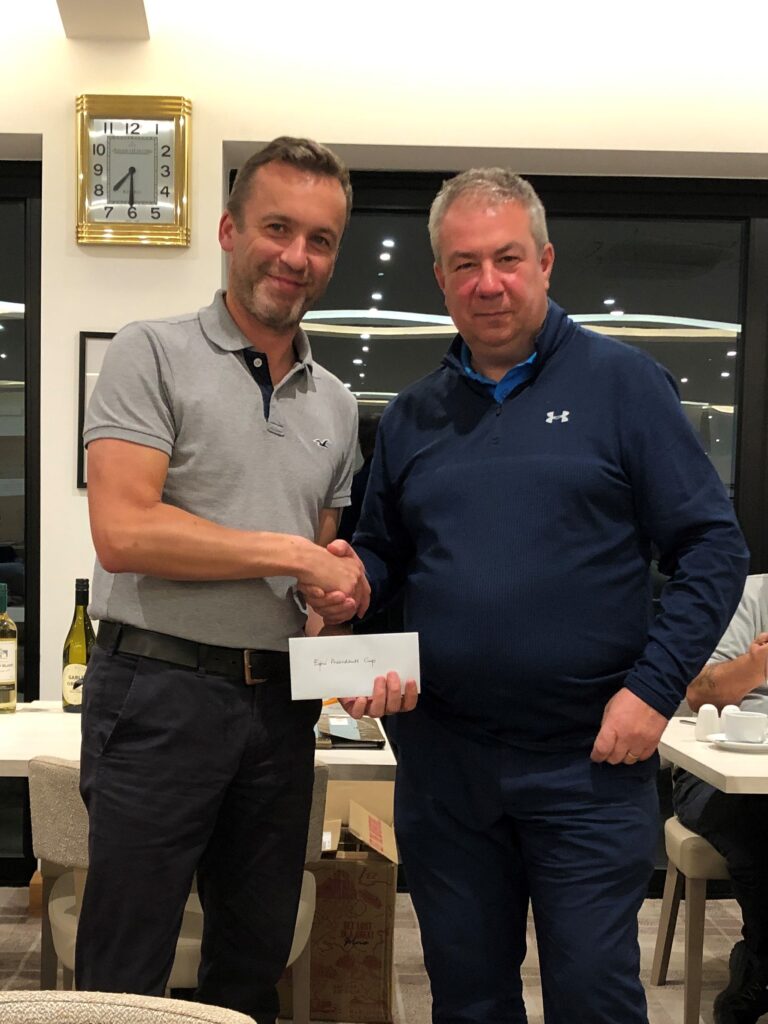 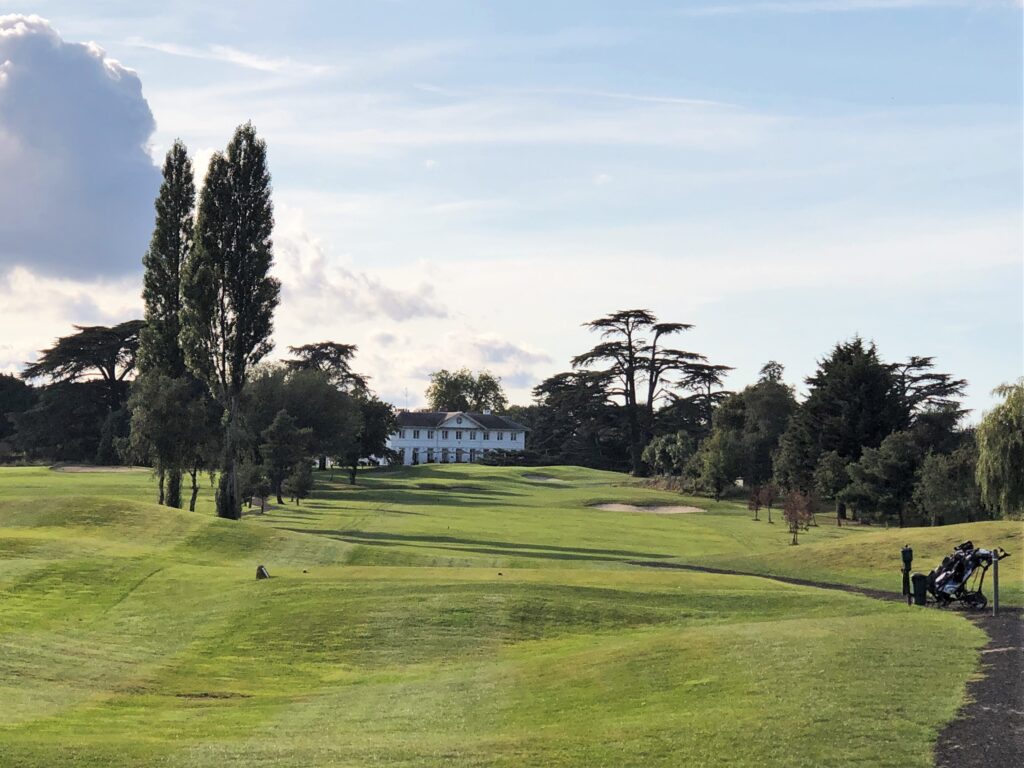 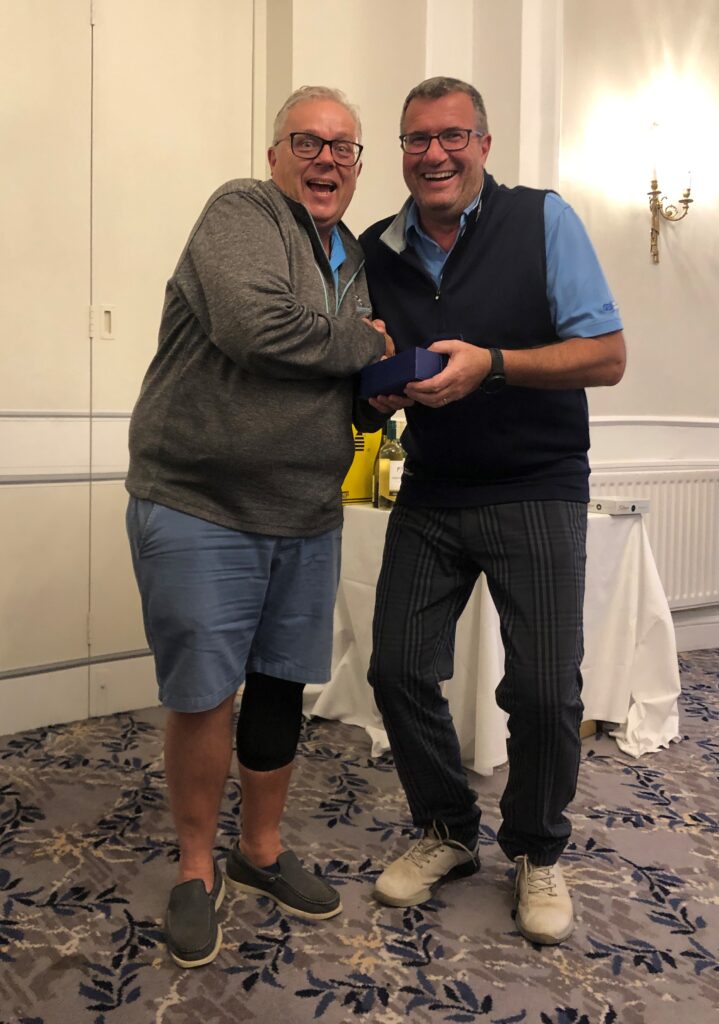 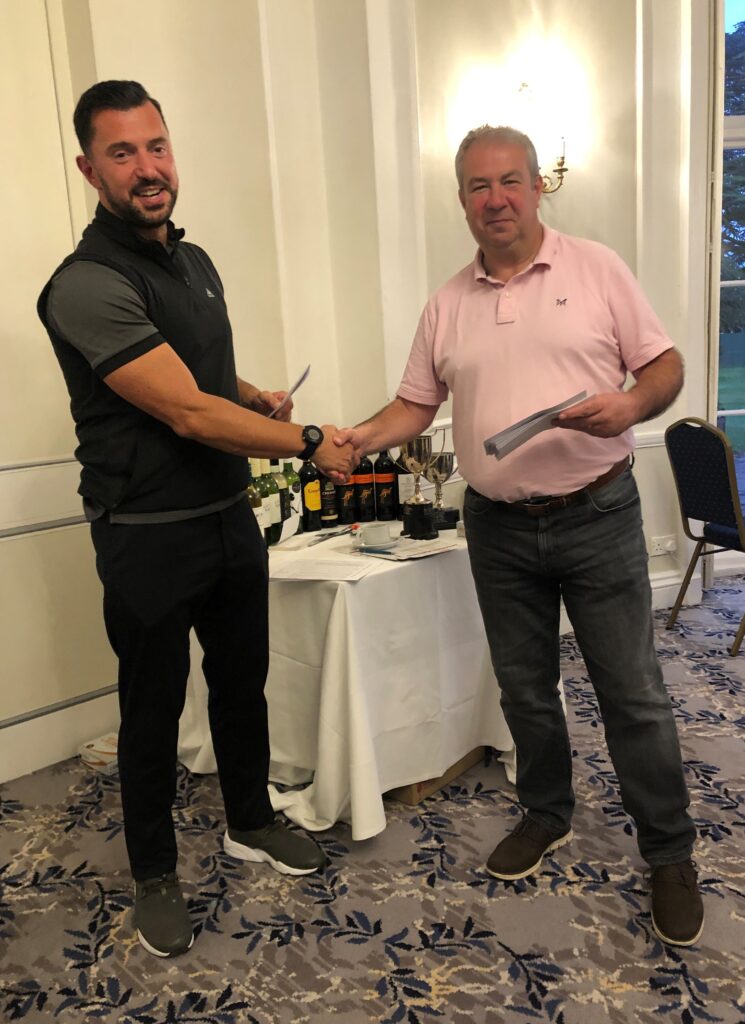 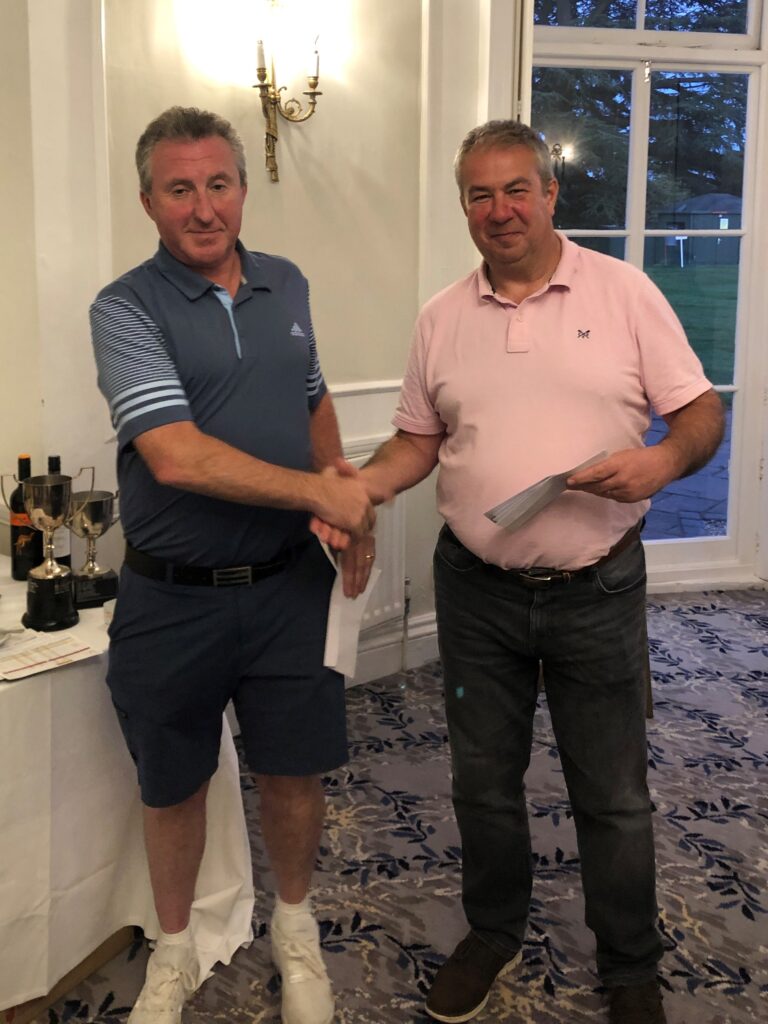 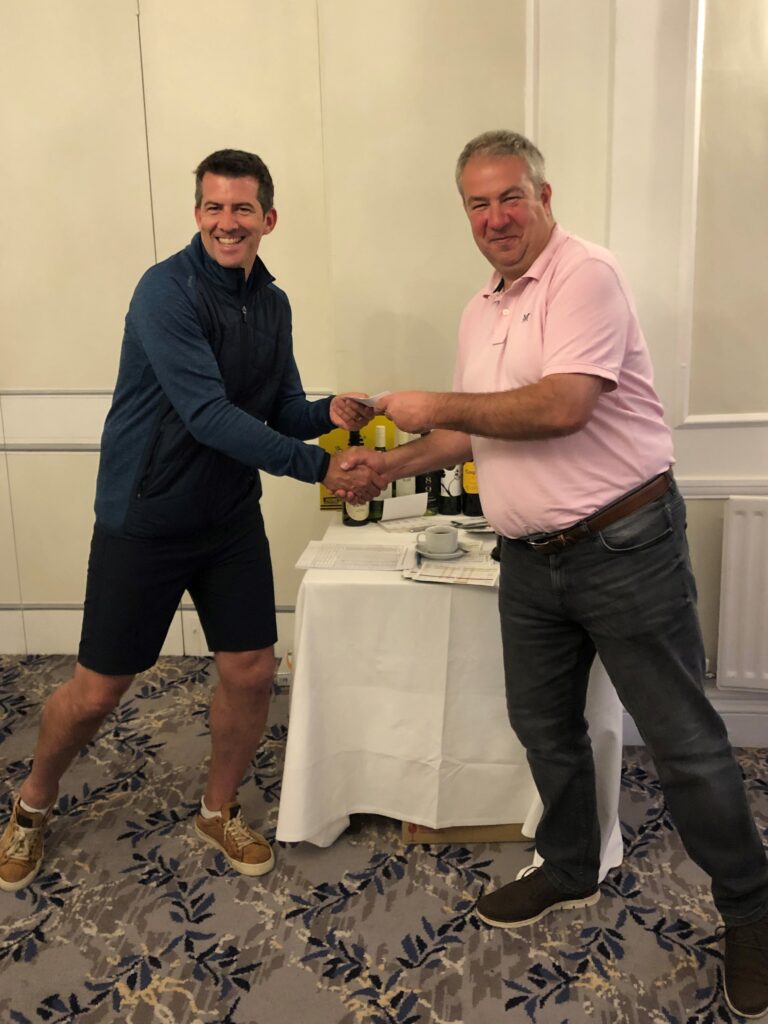 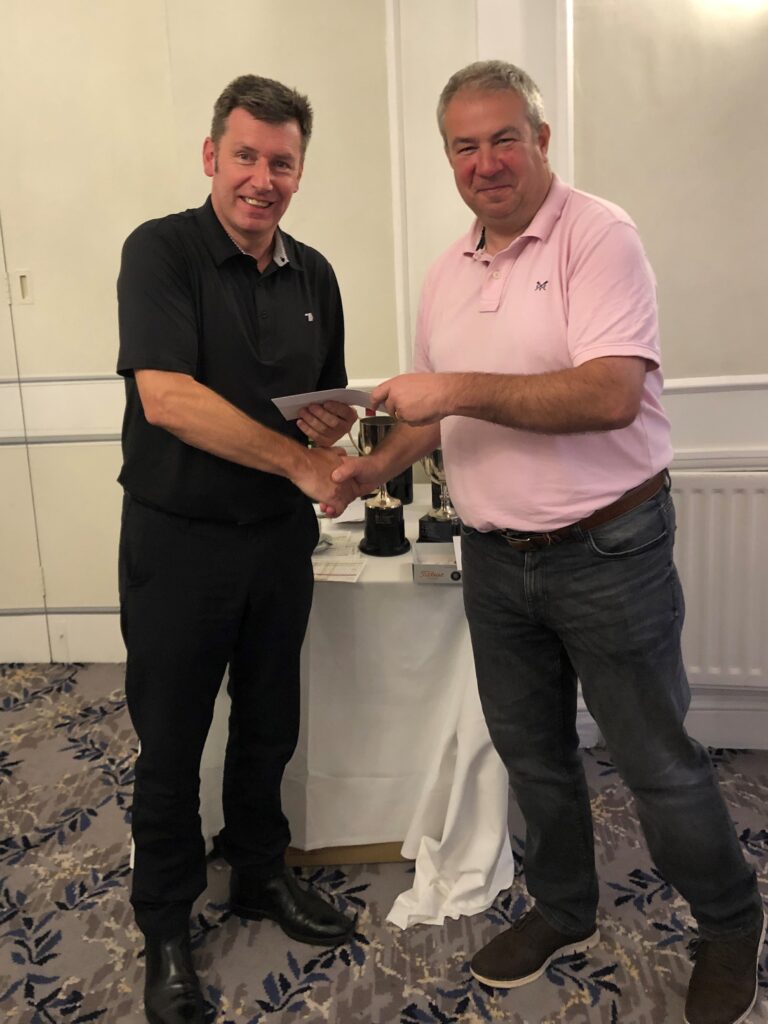 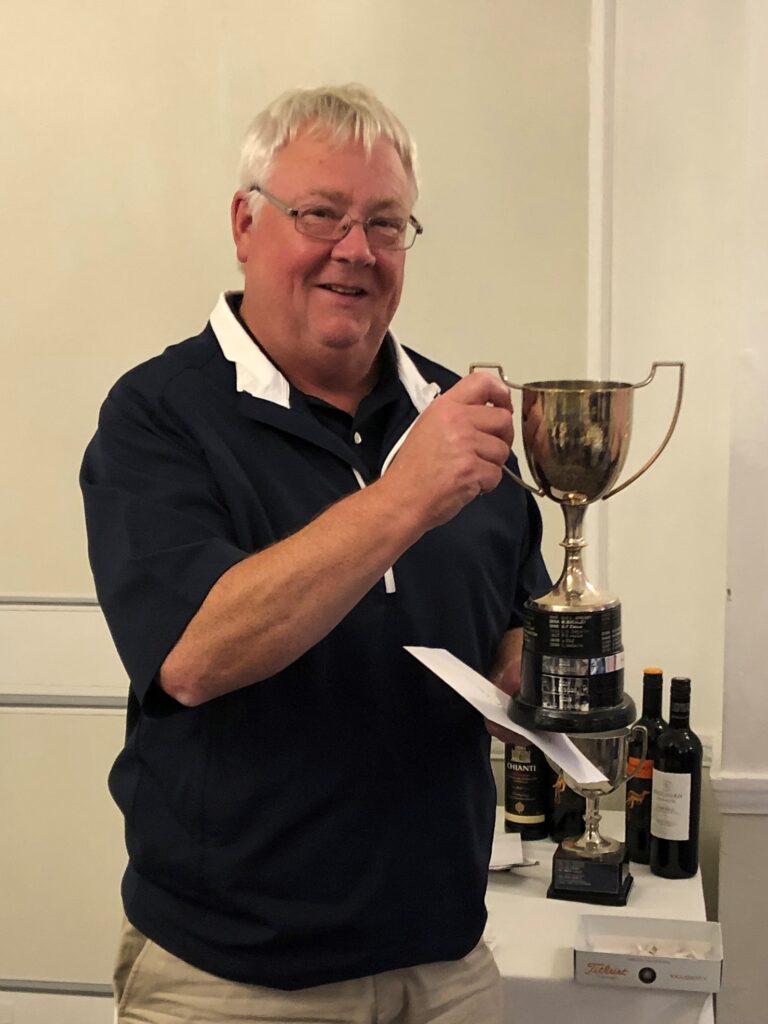 This years Tour to Southport taking in Royal Birkdale, Formby Hall and Hesketh was a great success with 20 players taking part. As you can see the weather at Hesketh was magnificent, but I get ahead of myself!!

Nearly all foregathered at the Vincent Hotel on Thursday evening and partook in the customary fitness and mental machinations prior to the first day at the magnificent Royal Birkdale.

Birkdale was in magnificent condition and their hospitality was second to none.

The winner of the Day was Michael Salmon with 33 points on countback from John McMenamin with Gareth Sheppard 3rd with 17 on the Back 9 on countback from Neil Blundy, Martyn Howie and Robert Seeley. Front 9 Winner was John McMenamin, with 18 winning on countback with 13 points on the last 6 from Martyn Howie, Robert Seeley and David Wannerton all with 12 on the last 6. Back 9 Winner was Neil Meixner with 18 points as Michael Salmon has already won a prize. NPx2 was Gareth Shepherd and the NP was handed down to Neil Blundy as he was 4th over all and Michael Salmon has already won a prize. The team score was 1.5 points to the Captain’s team and 3.5 to the Vice’s!

Day 2 saw us play the rather disappointing Formby Hall where the service and organisation were absolutely awful! However we stayed dry and  some had an excellent round

Winner on the day Oliver Tobin 33pts on count back – 16 on the back 9, Front 9 Ben Hurworth 21 pts and Back 9 Steve Haley 17 points. NP Stewart Kirkwood AKA Alvin and NPx2 Gareth Shepherd for the second time in two days!! The Vice’s team extended their team score lead after day 2. The scores were 3.5 points to the Captain’s team and 6.5 to the Vice’s!

Final Days Winners were – NP Oliver Tobin and NP in 2 Neil Meixner, Front 9 Ben Hurworth 22pts, Back 9 Neil Blundy 21 pts both and Day 3 Winner Steven Barker with 42 points and 22 on the back 9.

So to the overall results in the individual. Third over three rounds was Iain Stevenson with 96 points, Second Neil Blundy 99 points and The Green Jacket Winner and therefore the new holder of the Claret Jug Ben Hurworth with 103 points. Well done Ben!!

The team score was very closely fought on the final day with the Vice’s Team prevailing over the Captain’s by 10.5 points to 9.5 Points. Jason Wood (Vice Captain) presented an engraved whiskey glass to all his team winners as a memento of the weekend.

A great time had by all!! 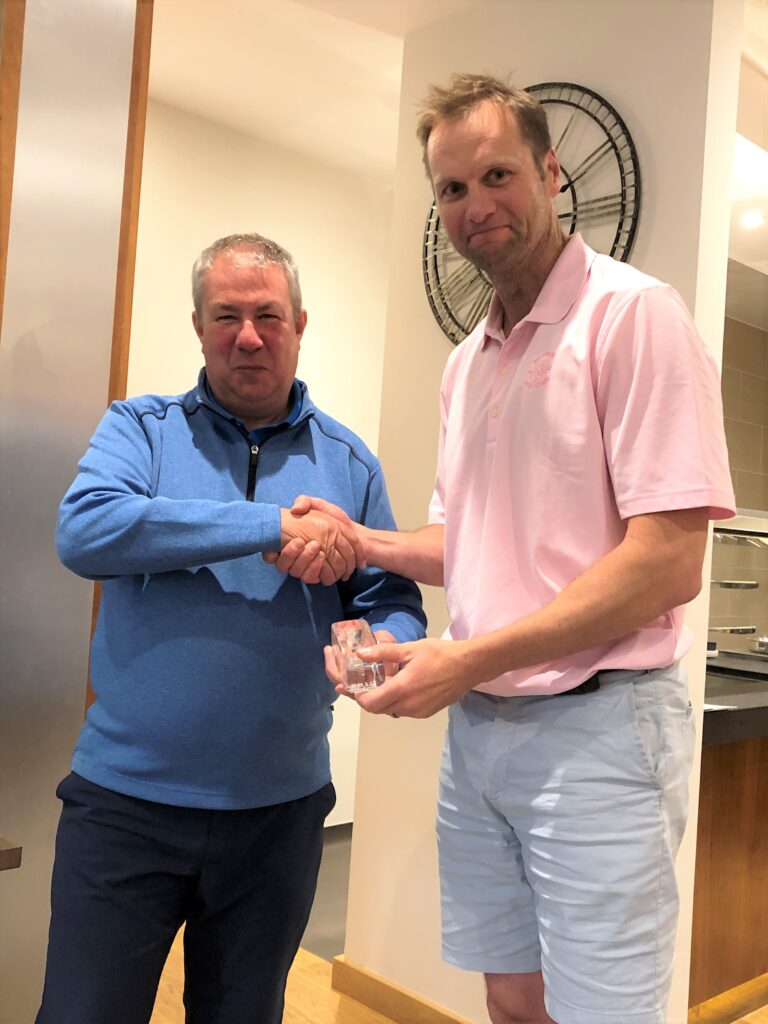 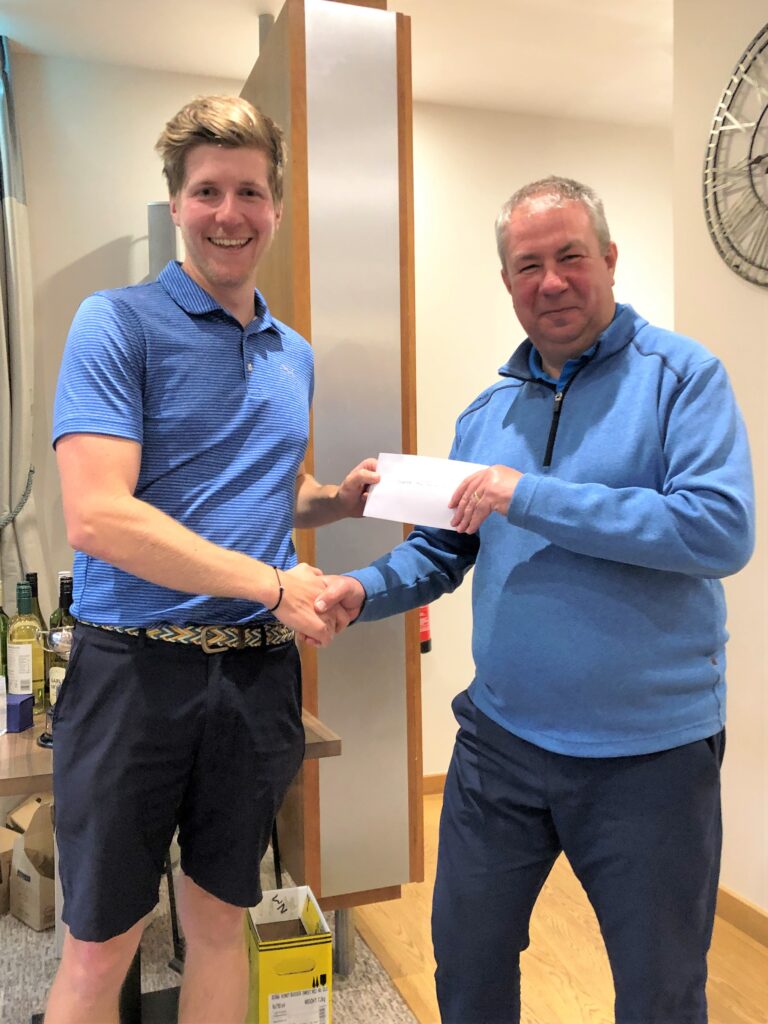 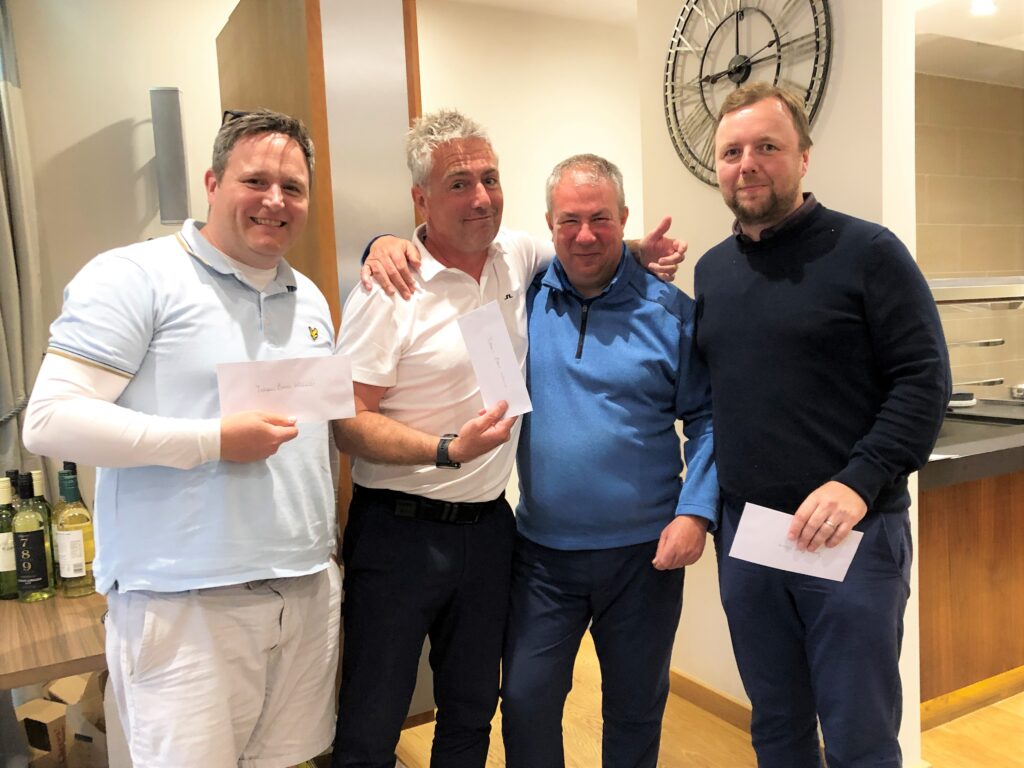 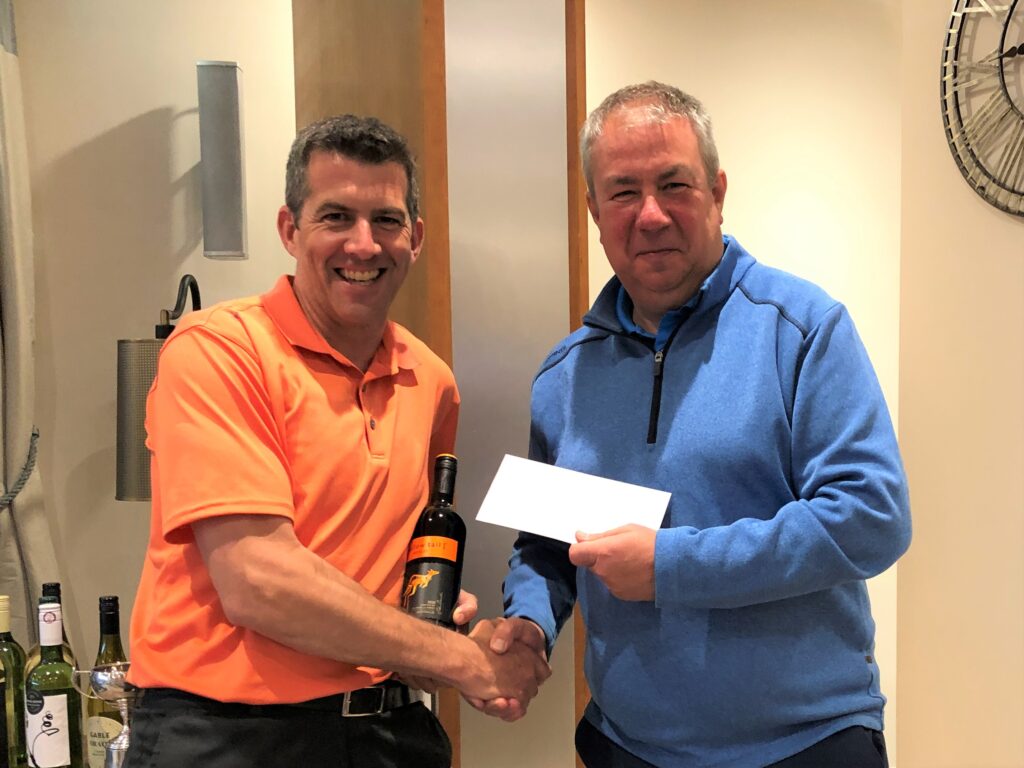 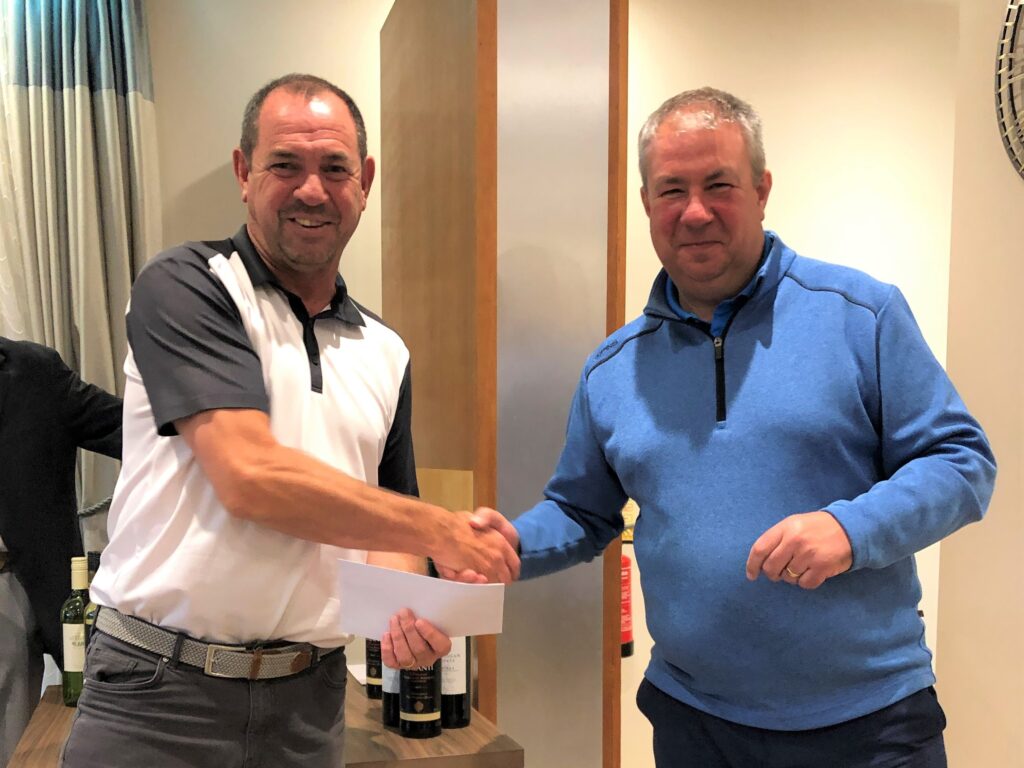 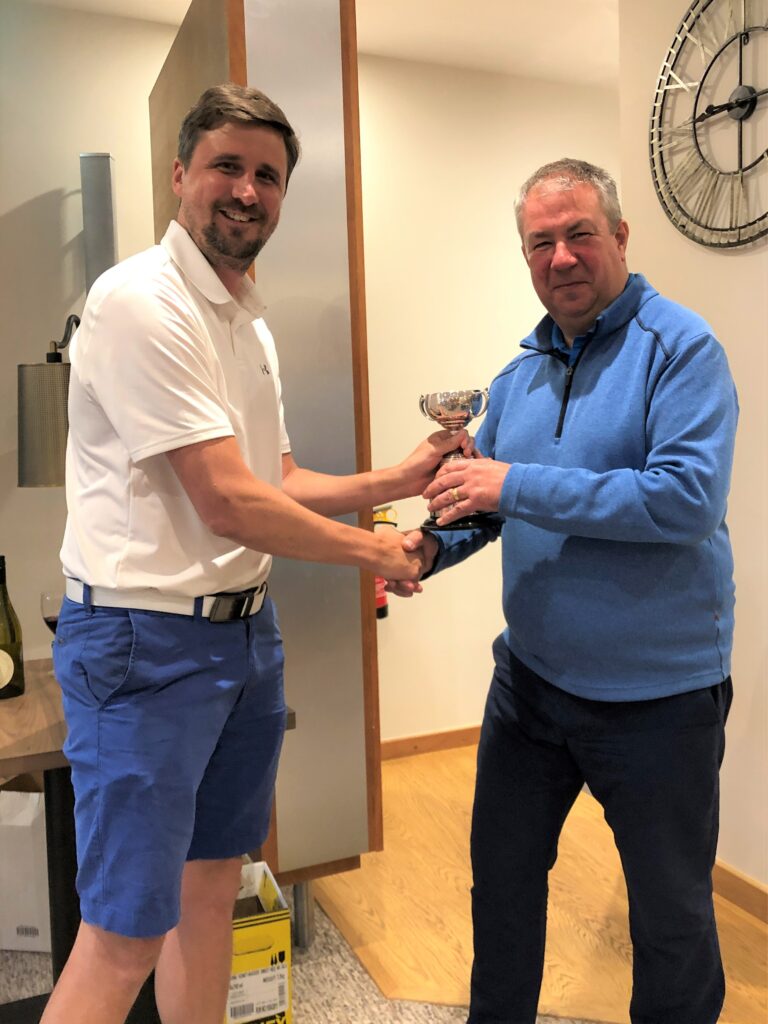 The weather was fine considering how bad May has been this year and the course was in great nick although playing long due to the lush fairways. Altogether a great test of golf!!

Before golf we were treated to a substantial ploughman’s lunch and after golf and foregathering in the Honours Bar we repaired to the dining area for a splendid meal and  prizegiving.

Without going into the intricacies of the scoring system (designed to limit any individual to a single prize) the results were as follows.

A reminder that we are at Ashridge on 23rd June 2021 so get it in the diary and sort out your guests.

The now traditional match between the two rival societies was held at Theydon Bois on a day which promised much rain but delivered little. The course had though suffered from previous rain and was somewhat waterlogged! Many thanks to Mike Foster for organising the club and indeed to Theydon Bois for great food and good service

The early matches were nip and tuck with Charles Gjertsen and Chris Anderson as well as Steve Hurworth and Martyn Howie earning a 1/2 point (the latter were denied a win by an enormous putt on the last hole from EPIC Member Gavin Tuck playing for the opposition!!!) with Rob Seeley and Mat Jones losing. Steve Davies and Michael Foster again could have won but secured a 1/2. So it came to the last two groups. 2 wins and the trophy was ours for the first time, a win and a half and we had a drawn match!!!!

The Neils (Blundy and Meixner) delivered a win but unfortunately having been 2 up at the start Iain Stevenson and Aidan Mahoney couldn’t quite hang on and with their loss we finally had to admit defeat 3.5 to 2.5.

The closest of margins.

Next year it will be BAGS choice of venue so we’ll probably be back at Thorndon Park!!

What a great turnout on Thursday (49 members and guests). Thanks to all who attended and enjoyed the course at it’s very best, with super-quick greens and beautifully manicured fairway and bunkers.
It was a great shame that we couldn’t network in the usual manner after the golf but as many have said to me “at least we are playing golf again!!”.
Thanks to all of your generosity we raised a whopping £380 for Rosie’s Rainbow Trust from the attendees £10 stake. The winner of the £75 voucher, drawn randomly this morning by my wife Christine, was Heather Last who will receive her voucher shortly via Steven Barker. Congrats to her and many thanks to you and your guests.
So to the results.
Following some adjudication by the secretary (which will not be subject to appeal) and some resulting minor adjustments to the leading scores the winners are as follows

I will be sending vouchers out to all winners shortly. (those for guests will be sent to their member invitee for onward transmission)

Congratulations to you all.
The next event is at Burhill on 26th May 2021. Golf from 1pm. Please put it in the diary!!  Full information will be issued next week!!

We thought we’d get away with a dry day! How wrong we were!!!! Although it started well there was some torrential rain for all on the front 9. The course was very wet anyway after record rain in early October.

Abridge Golf Club were absolutely fabulous at catering for us during these Covid times!! We were treated to a great meal in pleasant surroundings organised so well that at times one forgot we were in the middle of a pandemic!! Many thanks to the staff.

The Ball sweep added £325 to the Rosie’s Rainbow Fund coffers. Thank you all.

Scoring was excellent, by some, considering the conditions. 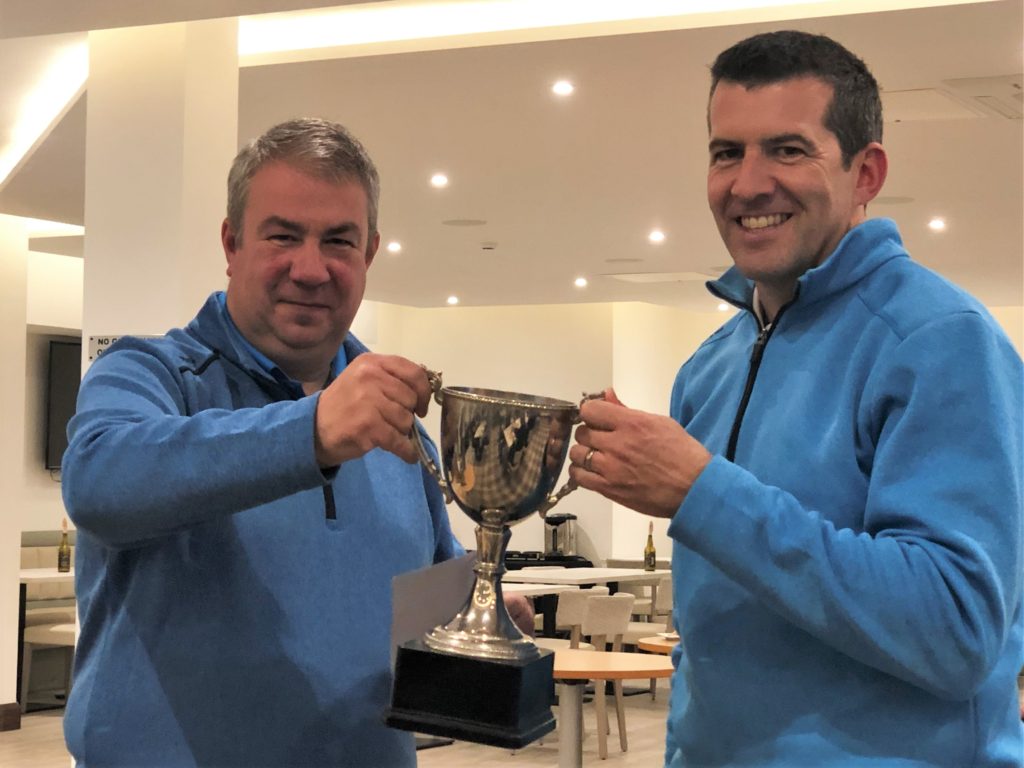 The President’s Cup, for EPIC Members, was won by Matthew Jones on 37 points (Cut 2) who received the trophy form Captain and runner-up Ian Stevenson 35 points (Cut 1) 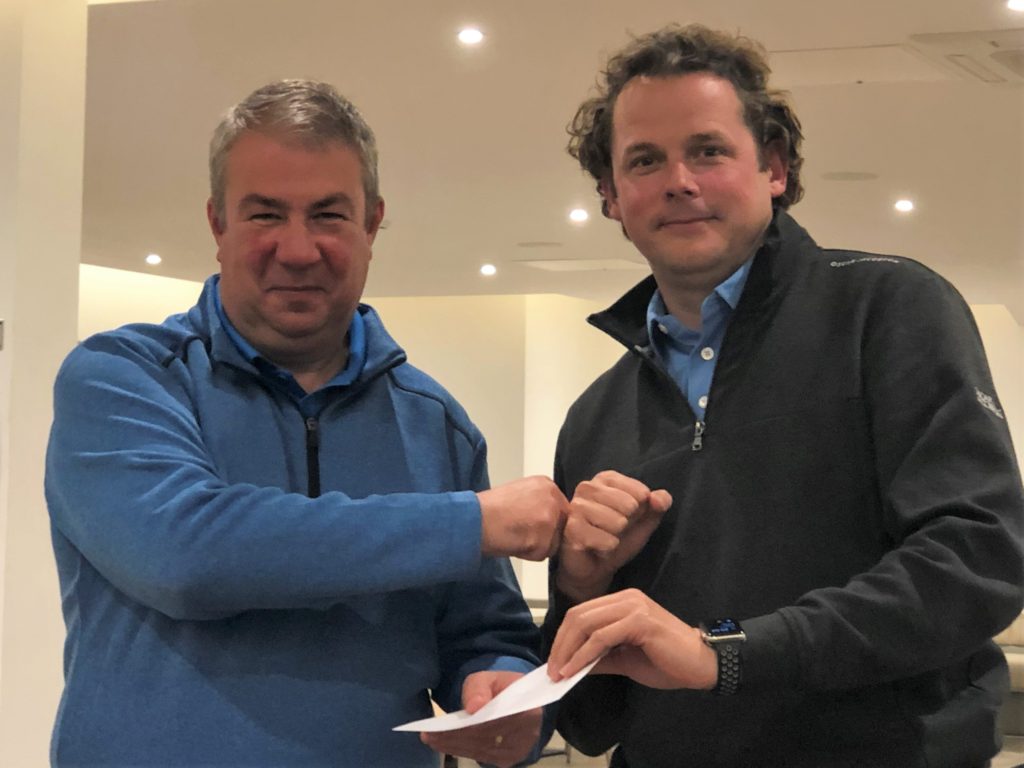 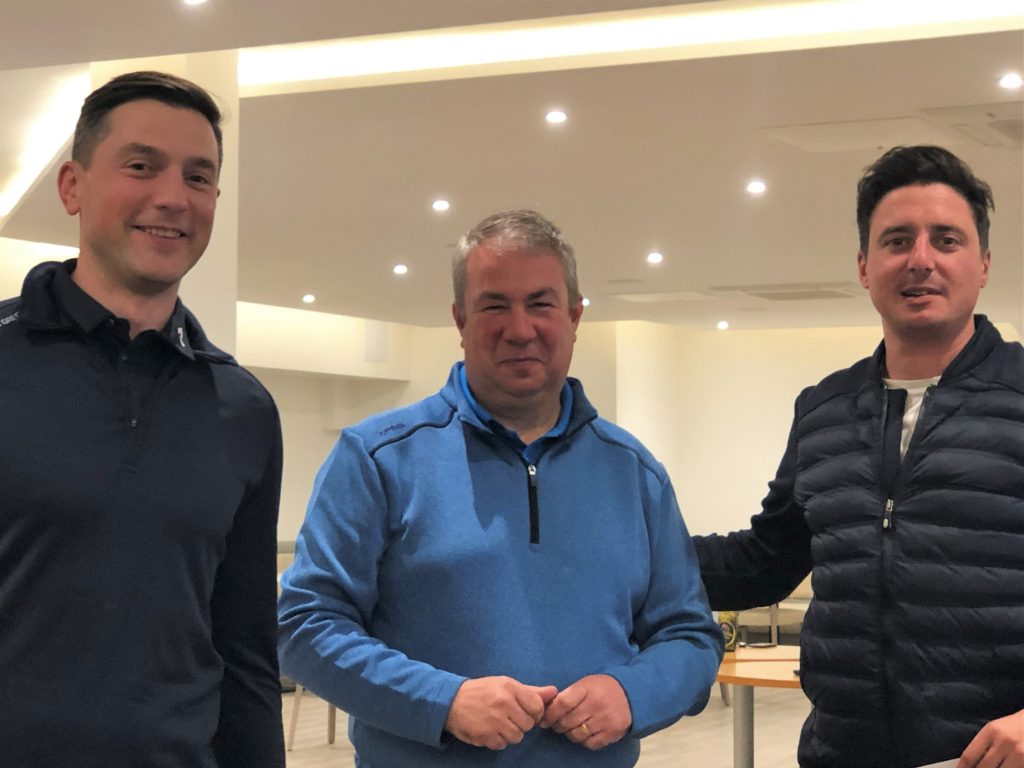 The Team competition was the closest fought with the “Dream Team” of Luke Croll and Jamie Dredge on 45 points narrowly beating two teams on 44 points to snatch the prize. 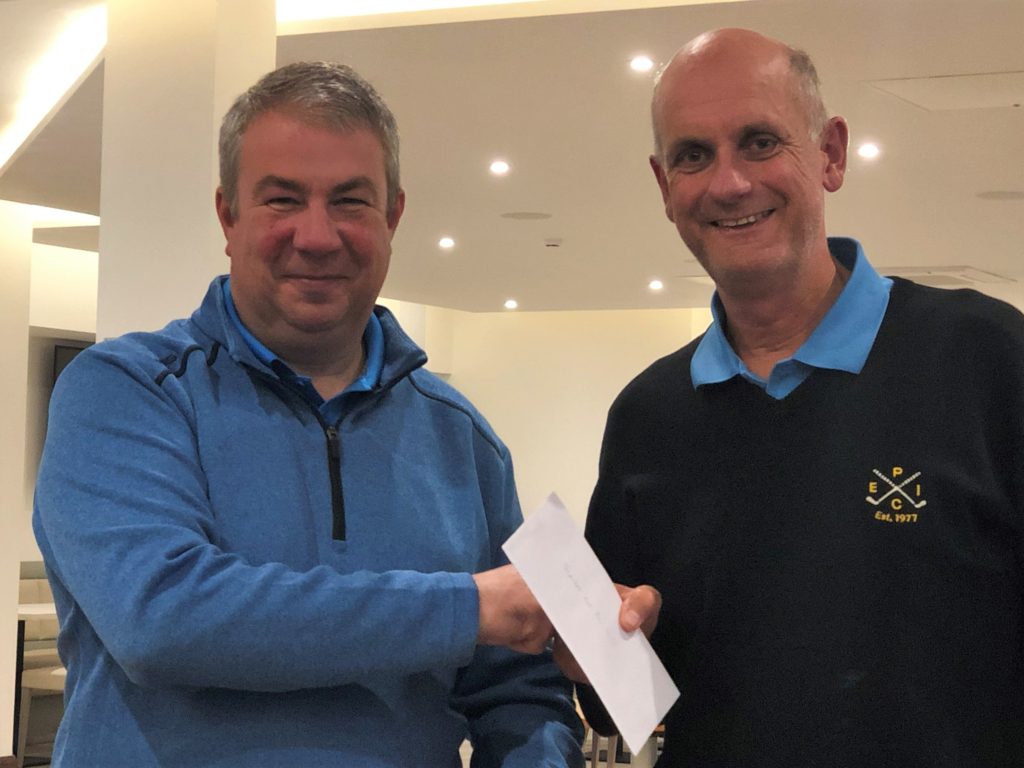 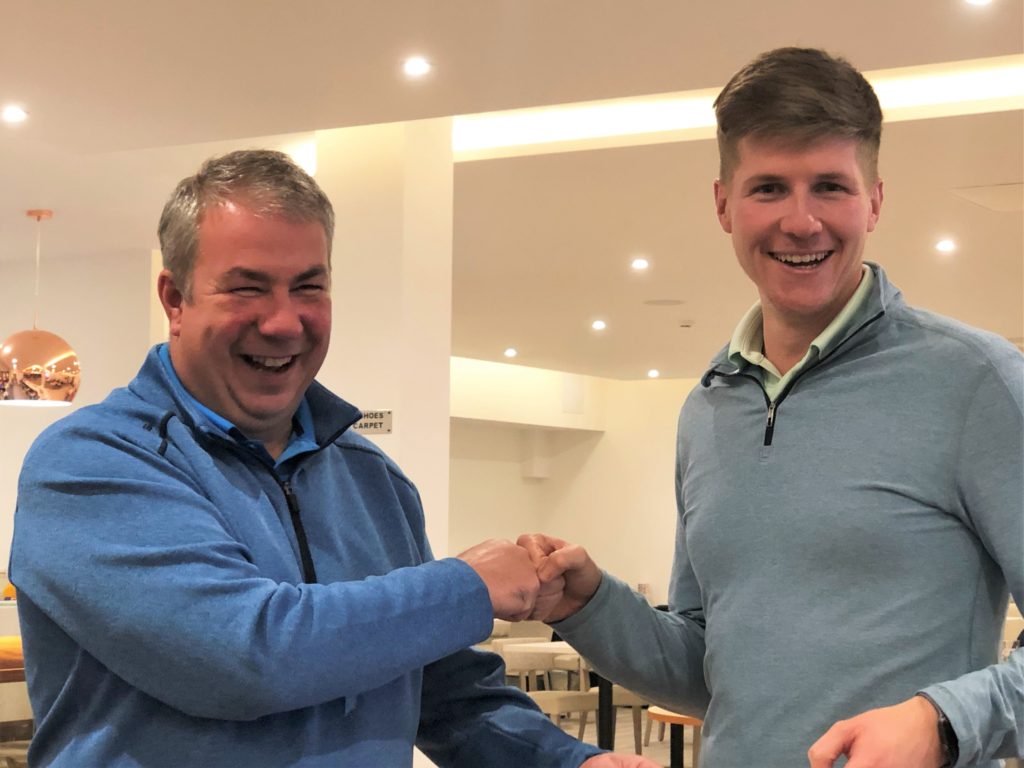 Well done to all our winners

The next event is Letchworth for “Family and Friends” on Tuesday December 29.

A great day out was had by 18 members and 15 guests playing the old course at Burhill, a new venue for EPIC and one I’m sure we’ll return to next year!

A ploughman’s lunch greeted guests and members alike followed by a sort game clinic prior to the main event starting at 1.10 from the first tee.

The short game clinic didn’t seem to assist many players as the scores lay testament to the difficulty of the read and speed of the greens – fast and with some amazing borrows!!

Burhill Golf Club and their staff were magnificent throughout the day and we were treated to a great 3 course dinner in the clubhouse.

We received a complimentary driver from the cancelled  golf tour to La Baule this year and Captain Iain supported by committee elected to raffle that for Ken Adams’s chosen charity Rosie’s Rainbow Trust. The driver was won by guest (soon to be member, we hope) Stewart Kirkwood. 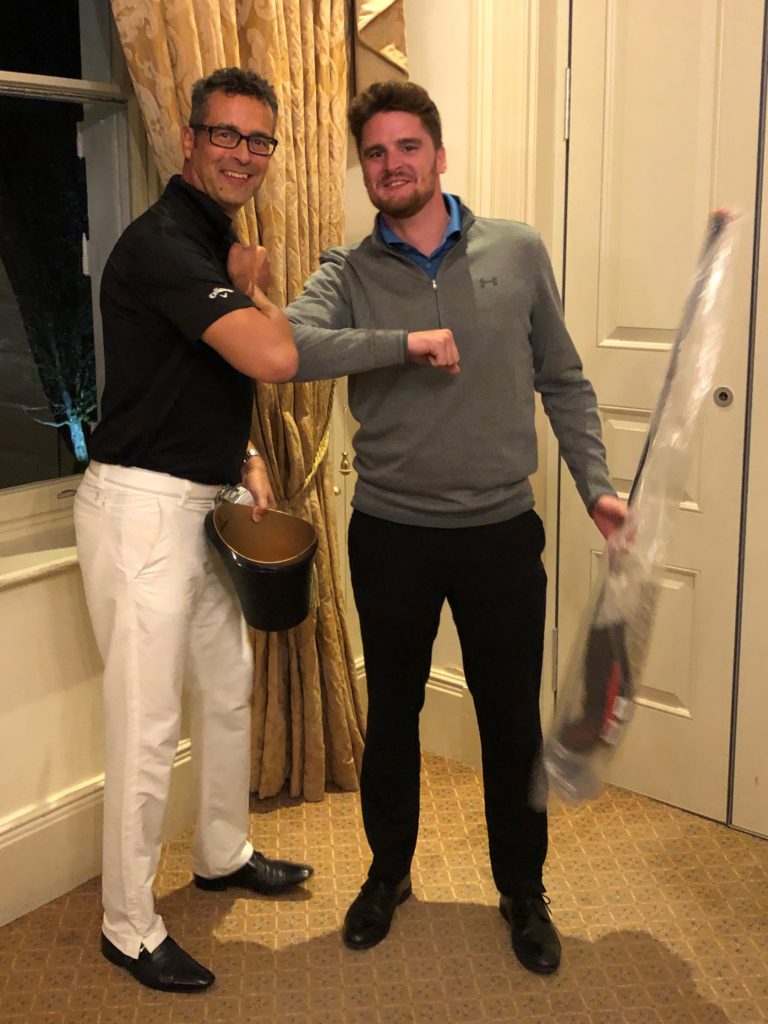 The raffle raised an amazing £590, congratulations to all who participated.

Left over from the AGM 2020, the following

The Guest Prize was won by Tony Humberstone playing off 9 with a magnificent 37 points. Tony was unable to stay for dinner.

Thanks to all who attended and a reminder that we hope to keep the event at Abridge 15th October 2020 live following HMG’s latest Covid changes. More later!!!

What a lovely day and a great course. Despite the huge amount of rain we’ve all had over recent weeks Letchworth Golf Course was in magnificent condition. The sun shone and it actually got quite warm after chilly conditions first thing!!

28 players – but only 7 members experienced this lovely course and had a memorable 2-course late lunch afterwards. 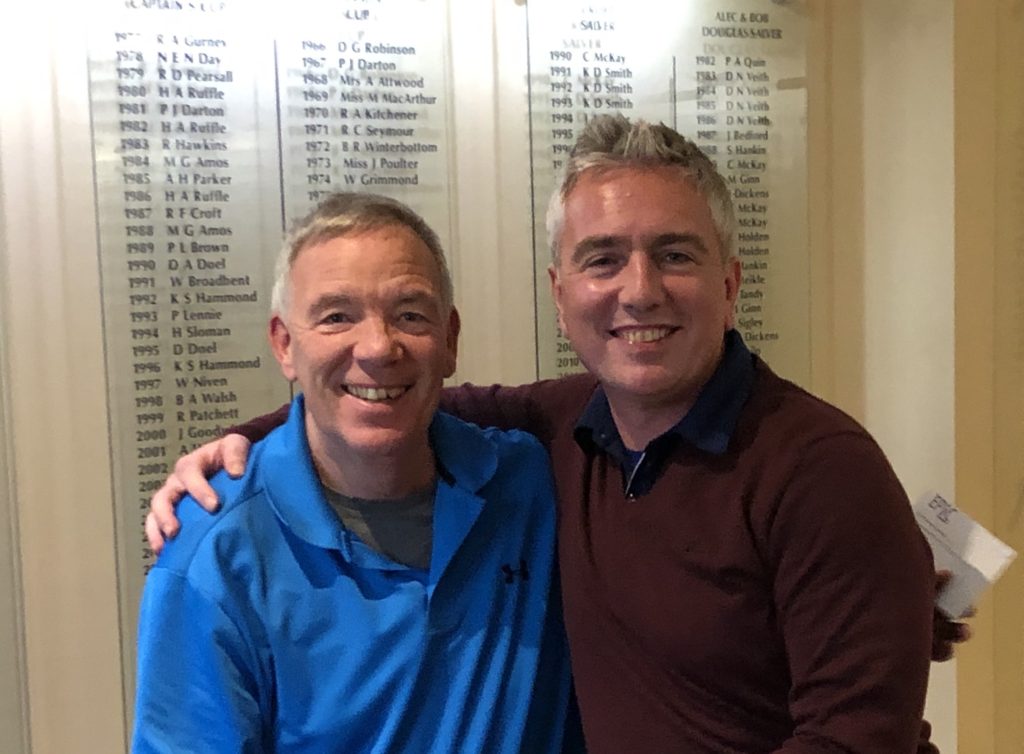 Nearest the Pin in 2 – Gary Chisnall 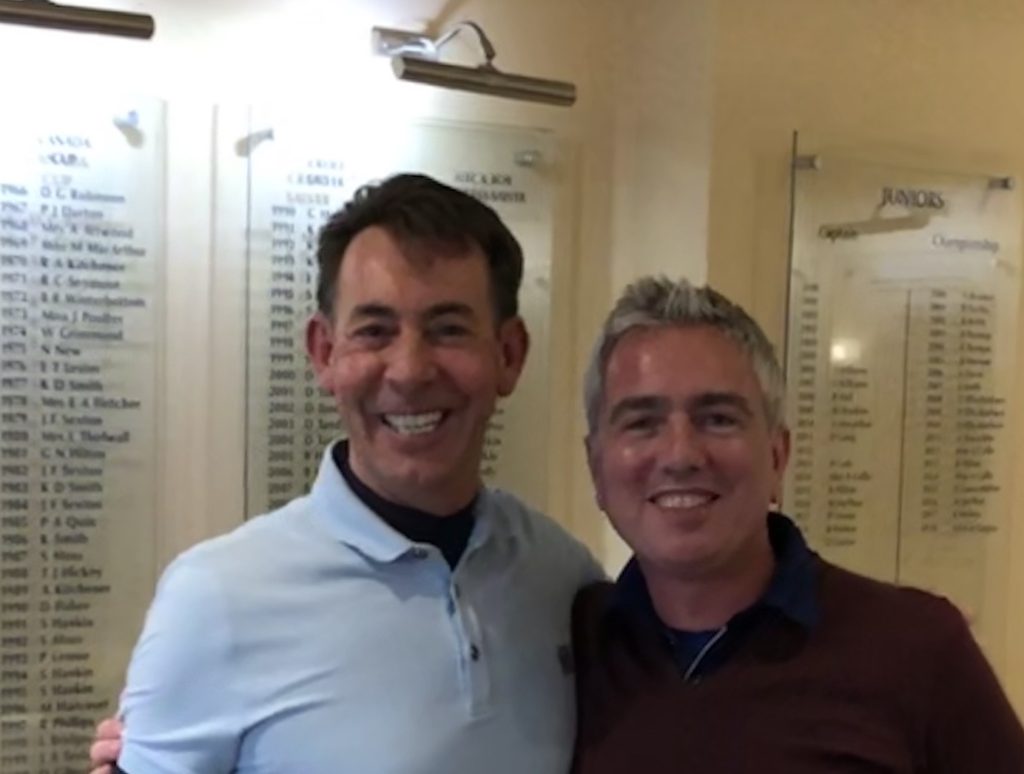 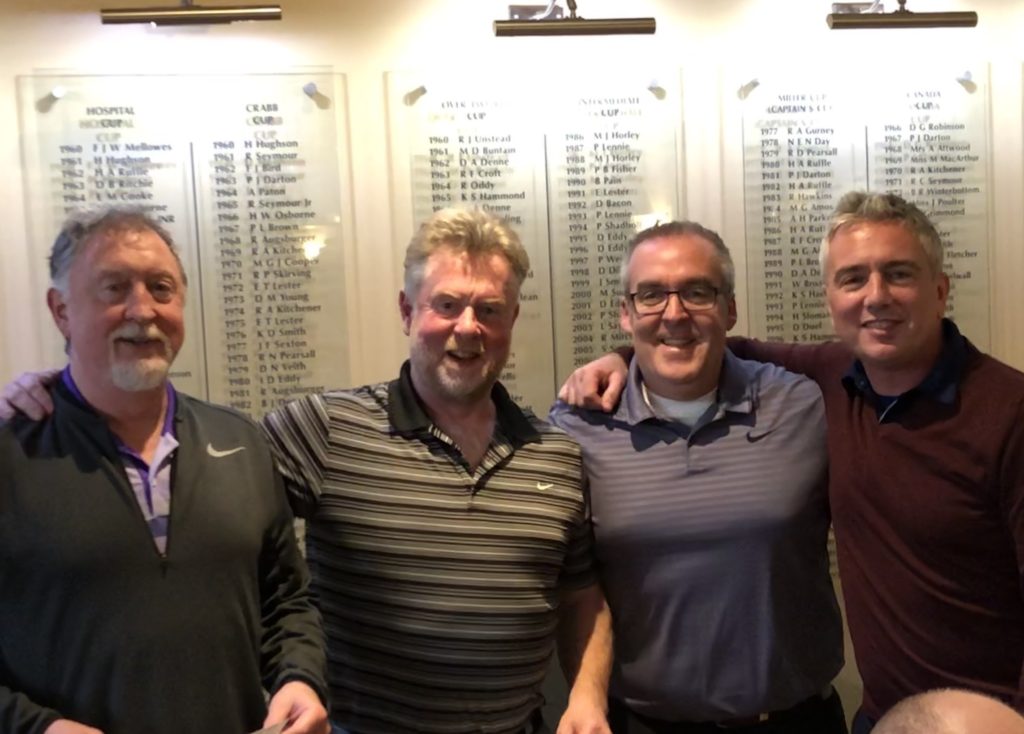 Well done to everyone who took part and don’t forget to let Neil Meixner know if you want to attend the AGM on 13th February 2020 if you haven’t already confirmed!!